The most obvious blog I will ever write

There is no way I could call myself a serious African-American blogger and not express my opinion about the editorial cartoon that ran February 18, 2009 in the New York Post. In case you have been busy, and like me don't read a lot of newspapers, let alone the Post, here is the cartoon: 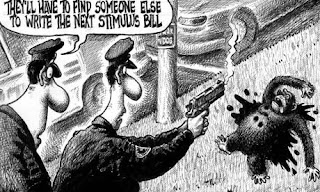 The artist, Sean Delonas, decided to combine the tragic story of a famous chimpanzee named Travis who went berserk, attacked a woman and was killed by police with the passage of the American Recovery and Reinvestment Act. I guess Delonas did not think highly of the stimulus bill, or the authors of it.

It just so happens that the primary architect of the bill is President Barack Obama, who, as you know, is our nation's first African-American U.S. President. Now before I register my complaint with the thousands of others who called the paper and the public figures that did interviews and press conferences, here is the defense of the cartoon by the Post's Editor-In-Chief, Col Allen:

"The cartoon is a clear parody of a current news event, to wit the shooting of a violent chimpanzee in Connecticut. It broadly mocks Washington's efforts to revive the economy."

Ok, so the New York Post editorial board dislikes the stimulus package so much that they thought a simian wrote it and now that one of the species is dead, they will have to find a new author for the next bailout bill. Usually when someone uses the words "parody" and "mocks" in a sentence, they are usually referring to something funny.

Mr. Allen, what in God's name is funny about this cartoon? History has reminded us that past political cartoons have depicted Blacks as primates. Rush Limbaugh compared Black South African officials with baboons on his short-lived TV show. So for your paper, not known for tactfulness, owned by arch-conservative Rupert Murdoch, to "broadly" compare Travis the Chimp to President Obama, was a bad move on so many levels.

Alright, Mr. Allen, since you have no sensibilities, let me explain to you why I am pissed. Considering the aforementioned history as part of my disgust, if you depict the President as a chimpanzee, and that image shows the animal shot dead by white police officers, in a climate where any U.S. President is a target for assassination, let alone a Black one, the cartoon is in no way funny. It is disgusting and reprehensible.

Mr. Delanos, your invidious attempt at satire was an abominable failure. Now your act sold newspapers and gave you some name recognition, which I guess is the ultimate goal of newspapers these days considering Time magazine's article about the dying industry. But you do know that you draw in a state that has an African-American governor? Governor Patterson said in an interview that the Post had some explaining to do.

I guess the objective of editorials, whether written or drawn, is suppose to shock and awe, in the essence of provoking intellectual debate about the issues of the day. However, instead of talking about the merits of the stimulus package, we are having a discussion about racial tensions and sensibilities in America. Therefore, Mr. Delanos and Mr. Allen, the cartoon failed in its mission.

Now as far as I am concerned, the Post's action falls under the category of my favorite quote, "they are who we thought they were." I am not surprised that anyone associated with Murdoch would go there. But even the people that I have little respect for can reach a new level of contempt that pushes my Christian ethics.

This reminds me of when Murdoch bought the Chicago Sun-Times. Mike Royko, the venerable Chicago journalist who wrote a book about Mayor Richard J. Daley's political machine and was the first to predict that Harold Washington would become the first Black mayor of the Windy City, left the Sun-Times and, literally, went across the street to write for the rival Chicago Tribune, because of Murdoch's reputation for yellow journalism.

That was a sad day for Chicago, but the city moved on. We, as African-Americans, will move on from this episode as well. However, it is important to document our anger and disgust and continue to put pressure on the Post to apologize for this cartoon.

Now in the end, I will be surprised if anything related to Murdoch would show contrition, and nothing short of a total economic boycott of the paper would get any kind of remorseful response. Nevertheless, I want to add my voice to the chorus of discontent.

I know that next week somebody will do something else to offend us, but this week our focus should be solely on the New York Post. Not only in our anger, but in our prayers for God to eventually change their hardened hearts.